Results: Six out of 37 cases demonstrated BRAF mutations: 4 were identified by PCR, whilst IHC and Sanger sequencin identified one mutation each. Three PCR mutations were at the V600E codon, whilst 1 case had a V600D mutation. Agreement between IHC versus overall BRAF mutational status, and sequencing versus overall mutational status, was 86.49% (p-value < 0.005). There was agreement of 94.59% between PCR and overall mutational status with statistically significant, moderate non-random concordance (kappa = 0.77, p = 0.0001).

Discussion: BRAF mutations were identified in 16.21% of cases, which is higher than frequencies noted in Western studies, but less than in an Eastern study. There was no association between MLH1 methylation and BRAF status in endometrial carcinomas from our patient population (kappa = ?0.0223, p = 0.6649). Our results in endometrial carcinomas, similar to findings from Western studies, indicate that BRAF mutations are not beneficial in distinguishing which patients have spontaneously occurring tumours from those who may harbour germline mutations and are suspected of having Lynch syndrome. 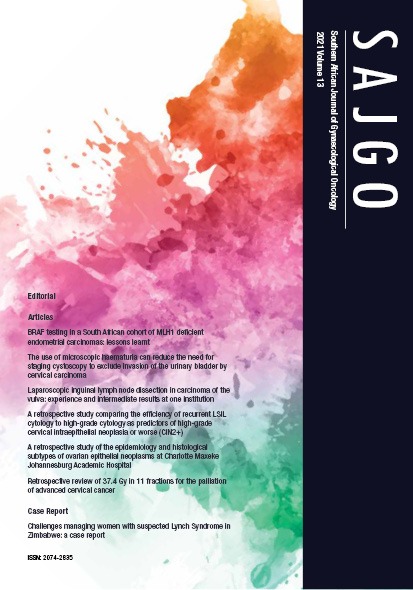 By submitting manuscripts to SAJGO, authors of original articles are assigning copyright to the South African Society of Gynaecologic Oncology (SASGO). Authors may use their own work after publication without written permission, provided they acknowledge the original source. Individuals and academic institutions may freely copy and distribute articles published in SAJGO for educational and research purposes without obtaining permission.